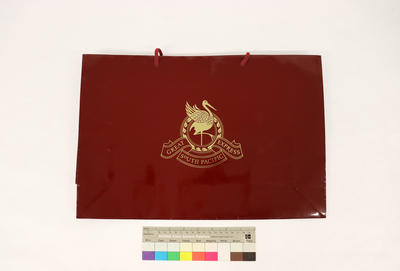 Description
A large rectangular red paper gift bag with the Great South Pacific Express logo in gold lettering on the front and back of the bag.

History and use
The Great South Pacific Express (GSPE) was a short-lived luxury train that operated between 1999 and mid-2003 with journeys up and down the Australian East Coast. In the mid-1990s, the concept of building a luxury train was developed in order to increase Queensland Rail’s (QR) long distance train offerings. In order to provide work to the Townsville Railway Workshop which in the early 1990s was at risk of closure, QR made the decision to build the new train’s rolling stock in Townsville.

The vision for the train was to be as grand, if not grander than the world’s most famous luxury train journey, the Orient-Express. It was originally thought that existing QR heritage rolling stock could be refurbished, but it was decided that all new carriages would constructed at Townsville on top of frames from surplus steel TLV guards vans. Inspiration for the new carriages was taken from special and saloon cars built by QR in the past.

Taking five years to complete, with 21 carriages built at Townsville, the train was ready for its full launch in 1999 (promotional journeys and appearances had occurred throughout 1998). The journey started in Cairns and travelled south to Brisbane, where the bogies were swapped for standard gauge at Acacia Ridge. The train then continued south into New South Wales stopping in Sydney, with journey able to taken in reverse. In 2000, a ‘Grand Tour’ trip from Sydney to Cairns in one of the two state compartment rooms cost $5070 per person (this did not include two nights accommodation in Brisbane while the bogies were swapped).

A company, the Heritage Train Company Pty Ltd, was established between Queensland Rail (90% share) and Venice Simplon-Orient-Express (10% share), which would lease the train from QR. The train was marketed to the highest end of the international travel market but ultimately suffered financially in the early 2000s due to changes in this market. Factors including the September 11 terrorist attacks, the Iraq war and the SARS epidemic were blamed for the train’s lack of success. In mid-2003, it was announced that with loses of $12 million, the GSPE would cease to operate.

The carriages were stored at the Ipswich Railway Workshops until 2016 when they purchased for use on the Belmond Andean Explorer in Peru.

The Great South Pacific Express showcased the elite skills and talent that the railway workers at Townsville possessed. Virtually no expense was spared (except on reusing the frames from old guards vans) when designing and constructing the carriages and the experience of the train journey itself mirrored this expensive feel. Staff who worked on the train were dressed in custom-made, Australian designed and made uniforms.