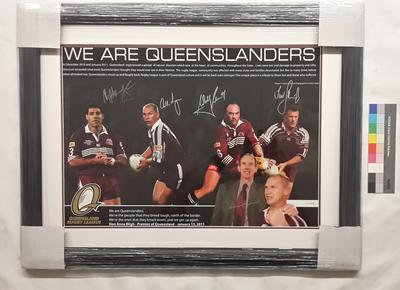 Framed Commemorative Print 'We are Queenslanders'

Description
Framed image showing four State of Origin players with signatures and a quote from former Premier of Queensland, Anna Bligh about the 2010/2011 Queensland flood.

Signature/Marks
WE ARE QUEENSLANDERS \ In December 2010 and January 2011, Queensland experienced a period of natural disasters which tore at the heart of communities throughout the State. Lives were lost and damage to property and infra- \ structure exceeded what most Queenslanders thought they would ever see in their lifetime. \ The rugby league community was affected with many clubs and families devestated. But like so many times before \ when all looked lost, Queenslanders stood up and fought back. Rugby League is part of Queensland culture and it will be back even stronger! This unique piece is a tribute to those lost and those who suffered. \ Images Courtesy of Action Photographics & Getty Images \ /1000 \ QUEENSLAND RUGBY LEAGUE \ We are Queenslanders \ We're the people they breed tough, north of the border. \ We're the ones that they knock down, and we get up again. \ Hon Anna Bligh - Premier of Queensland - January 13, 2011.
Framed by \ Icons of Framing \ www.iconsofframing.com.au \ Freecall 1800 200 476 \ icons of framing
QC
PERSPEX CARE INSTRUCTIONS \ Perspex (Acrylic) glass requires specific care. \ Clean glazed area with a soft damp cloth, \ softly rubbing in a circular motion. \ Sometimes a mild detergent can be used, if well watered down. \ Glass cleaners for glass, but never for Perspex (Acrylics.) \ Don't ever use solvent based products to clean \ Perspex (Acrylics). \ Unit D2, 290 Paramatta Road, Auburn NSW 2144 \ www.iconsofframing.com.au - Freecall 1800 200 476

History and use
This framed, printed image showing some of the 'Origin Greats' with their signatures, was produced by QRL (Queensland Rugby League) following the event of the Queensland floods of 2011/2012. It was produced in order to raise money for people who were flood affected.
It is significant for its commemoration of a significant event in Queensland, the devastating 2011 floods. It is also significant for associating the State premier of the time, Anna Bligh, with the State of Origin rugby league series, through its depiction of ex State of Origin players and an excerpt from the speech by Anna Bligh to the Queensland people after the floods. This speech became a rallying point for Queenslanders as Ms Bligh exhalted Queenslanders for their perserverance, courage and mateship throughout and after the floods.

Framed Commemorative Print 'We are Queenslanders'