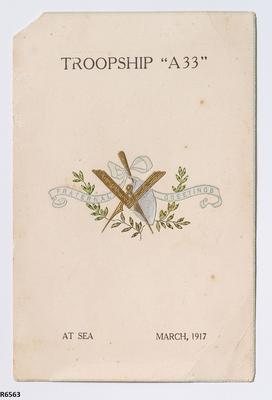 Description
A white single sided cardboard card. The embossed emblem on the front is a typical freemason square and compass symbol.

History and use
This postcard is part of a small collection of documents related to Queensland Railways employee Francis Vivian Gallwey, who enlisted in the 4th Pioneers Battalion in April 1916. Sapper Gallwey travelled to Britain on HMAT Ayrshire. After arriving in Britain in early 1917, he went on to serve in France, being awarded a Military Medal in September 1918.

Troopship A33 travelled regularly to Europe transporting troops. In the course of his journey on the Ayrshire (Troopship A33), Gallwey together with other Freemasons on the vessel arranged the printing of commemorative ephemera as a memento of the trip.