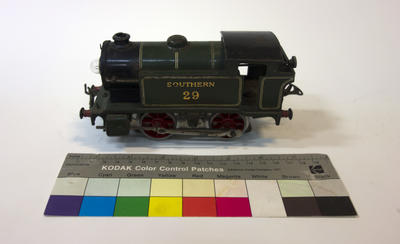 Description
An O gauge tinplate steam outline tank locomotive with 4 wheels. The boiler, dome, tanks, cab, frames and pistons are painted green. The chimney, smokebox, buffers and cab roof are painted black. The side rods, handrails and mechanism are unpainted metal. The wheels and buffer beam are painted red.The locomotive is powered by a 20v electric motor and a light bulb is fitted to the front of the smokebox door. A knob on the end of a rod protrudes from the back of the cab.