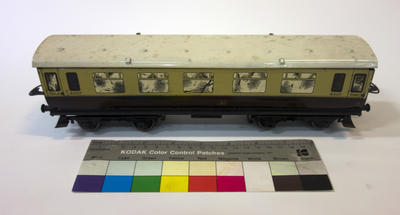 Description
An O gauge tinplate passenger coach with a bogie containing 4 wheels at each end. The body of the coach is cream and brown. The roof is white. The frame and bogies are black.

History and use
This O gauge Bogie Passenger Coach was produced by Meccano Ltd in the 1930s as part of their Hornby brand of toy trains. It is manufactured from tin sheeting printed with the details of windows and doors that has been folded and pressed into shape. It is from the collection of O Gauge Tinplate Trains owned by Clive McTaggart.