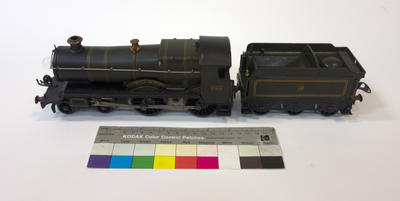 History and use
This O Gauge Electric 4-4-0 Tender Engine was produced by Meccano Ltd in the 1930s as part of their Hornby brand of toy trains. It is manufactured from tin sheeting folded and pressed into shape, painted and marked with transfers. It is from the collection of O Gauge Tinplate Trains owned by Clive McTaggart.

Hornby O gauge Trains were produced by Meccano Ltd between 1920 and the mid-1960s. Capitalising on anti-German sentiment and a demand for British made products in the aftermath of the First World War; Frank Hornby expanded his Meccano factory in Liverpool England to produce toy trains. Named after their creator, the Hornby range developed into a comprehensive model railway system that included locomotives, rolling stock, track, signals, buildings, figures and scenery. The range developed over the 1920s and 1930s but production halted during World War Two as the factory’s resources were directed to war work. The line was revived after the war but with a significantly reduced range. Production ceased in the mid-1960s. Hornby trains were exported to countries around the world, including Australia.This locomotive is based on the ‘County’ Class Locomotives produced for the Great Western Railway in Britain between 1904 and 1906 with a further batch being built in 1911-12. The locomotives were used on express passenger trains. All had been withdraw from service and scrapped by 1933.