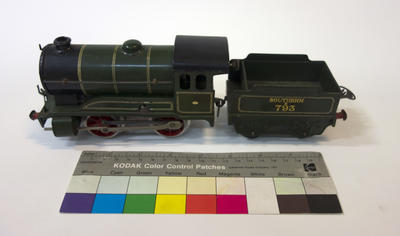 Description
An O gauge tinplate model of a steam locomotive and tender. The locomotive has 4 wheels. The boiler, cab, running board, splashers, pistons and front coupling are painted green. The smokebox, funnel, cab roof and buffers are painted black. The buffer beam and wheels are painted red. The smokebox door handle, handrails running along each side of the boiler and side rods connecting the wheels are silver. The tender has 4 wheels. The body and frame of the tender are painted green, the buffer beam is painted red. The model is powered by a clockwork motor inside the locomotive.