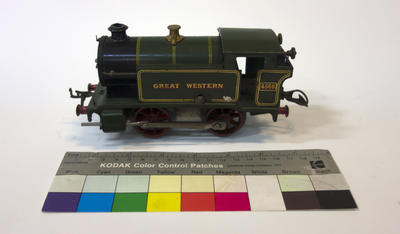 Description
An O gauge tinplate steam tank locomotive with 4 wheels. The frames, tanks, cab and boiler are painted green. The smokebox, chimney and buffers are painted black. The buffer beams and wheels are painted red. The dome is painted gold. The locomotive is powered by a clockwork motor.