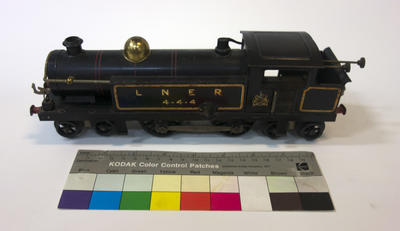 Description
An O gauge tinplate steam outline tank locomotive. The locomotive has a set of 4 driving wheels. It has a pony struck at each end containing 4 wheels. The boiler, tanks, cab, smokebox, chimney, and buffers are painted black. The dome is coloured gold. The buffer beams are painted red. The model is powered by a clockwork mechanism. The mechanism is wound through a hole in the left side tank. The mechanism is controlled by two rods that extend from the back of the cab.

History and use
This O gauge locomotive was produced by Meccano Ltd in the 1920s as part of their Hornby brand of toy trains. It is manufactured from tin sheeting folded and pressed into shape, painted and marked with transfers. It is from the collection of O Gauge Tinplate Trains owned by Clive McTaggart.