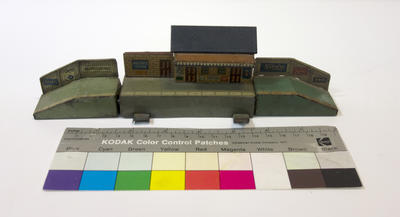 History and use
This 00 Gauge Railway Station was produced by Bing Werke in the 1920s as part of their Bing Tabletop Railway range. The Bing Table Top Railway system was the first commercial 00/H0-gauge system ever produced, and as such can be considered the ancestor of all modern 16mm-gauge model railways. It is manufactured from tin sheeting folded and pressed into shape. It is from the collection of Tinplate Trains owned by Clive McTaggart.

At the beginning of the 20th century the German company Bing was the world’s largest toy manufacturer and exported across Europe and America. Bing also provided toy train products for the British market and worked closely with Bassett-Lowke – a toy business based in Northampton in England’s East Midlands. Bassett-Lowke assisted Bing with research and design work to produce models that more closely reflected British railway practices. In the lead up to the First World War the two companies began working on a more compact model railway system aimed at consumers with less space for setting up a model railway. At this time, even the smallest model railway gauge – O gauge – took up a significant amount of space for a basic layout and usually had to be run on the floor. As house sizes shrunk, demand for more compact toy trains grew. Bing began plans for a railway system half the size of O gauge.

Design of the range was stalled during the First World War, but resumed when hostilities ceased. The first products came onto the market in 1922. Despite the innovation of its design, the system only experienced moderate success. The size of the locomotives pushed the design of electric and clockwork motors to their limits, but the manufacturing processes used meant the rolling stock lacked the detail and accuracy achievable in larger scales. The post war period was a challenging time for Bing. Products imported into Britain from Germany had to prominently display their origin on items and packaging. Anti-German sentiment limited the appeal of the range to British consumers. The economic, industrial and political turmoil in Germany after the war also contributed to a significant downturn in the success of Bing. By 1927 the company was in financial trouble and the beginnings of the Great Depression bought further debt. No German Banks would loan the Bings - who were Jewish – money amidst the rising antisemitism of 1930s Germany. By 1932 the company was in liquidation and the Bings fled to England as Adolf Hitler rose to power. When Bing closed down for good in 1933, much of its tooling was acquired by rival toy companies. Manufacturer Bub purchased the table top range and continued to manufacture it – mainly for the German market as rising inflation made exporting goods even more challenging.

Clive McTaggart was born in Brisbane on the 16th of February, 1921. A pilot with the RAAF during World War II he worked ferrying aircraft between America and Australia, as well as flying combat and air/sea rescue missions. After the war he pursued his keen interest in model railways, organising displays and exhibitions, as well as operating one of Australia’s first dedicated model railway stores Austral Modelcraft out of his home in Ekibin. Whilst Clive had little spare time to build a model railway of his own he did collect O gauge tinplate trains produced between the 1920s and 1960s.