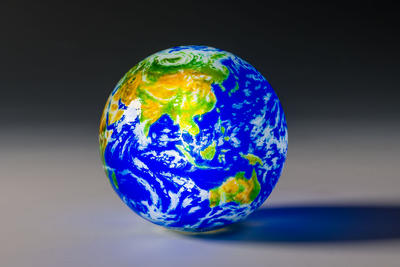 Description
Multi-coloured sphere depicting oceans and land formations of earth in shades of deep blue, green and ochre. A circular panel on the underside of the sphere is attached with three metal screws. A switch in the panel's centre is attached with two smaller metal screws. The sphere is able to be illuminated from within using the switch to connect to a globe within the sphere.

GC2018 contributed to public discourse on reconciliation and the need to support the rights of Indigenous people in Australia and across the Commonwealth. Like the Brisbane 1982 Commonwealth Games, which provided the backdrop for a revolutionary movement to draw attention to Indigenous civil liberties and land rights, GC2018 presented Indigenous rights activists with an opportunity to broadcast the injustices and discrimination experienced by Indigenous Australians to both a national and international audience.

GC2018 implemented several community and equality-based initiatives, including a more inclusive para-sports programme and seven new events for women, making GC2018 the first Commonwealth Games to enable women participants to participate in as many medal events as men.