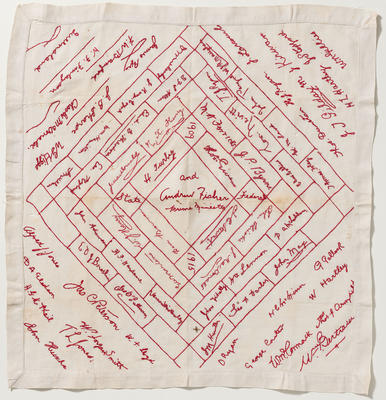 Description
A square linen cloth featuring the embroidered signatures of Labor party members of the Federal and Queensland State Parliaments who served during the Prime Ministership of Andrew Fisher from 1909 -1915.

History and use
The Ruth McFeat collection consists of a a linen ‘tea’ cloth, made about 1915 by Beatrice Ingham (Waugh) Ferricks (1880-1951), wife of Queensland Federal Labor Senator, Myles Aloysius Ferricks (1875-1932). Donated by Beatrice and Myles Ferricks’ granddaughter, Ruth McFeat, the cloth features the embroidered signatures of prominent Federal and State Labor Party Senators and Members of Parliament, including those of Prime Minister Andrew Fisher and Queensland Premiers, Thomas Joseph (T J) Ryan and Edward (Ted) Theodore.

Also included in this donation is a long-sleeved evening dress of black lace with black silk under-slip, worn by Beatrice to official parliamentary events with her husband. Believed to have been made or purchased early in her husband’s federal parliamentary career, the dress was Beatrice’s best, and only, formal dress and also served as a mourning gown after her husband’s death in 1932. It was also most likely the ‘black lace dress’ referred to in news reports which Beatrice wore at the marriage of her eldest daughter, Ellen Mary, to Brisbane optometrist, Raymond Sankey Fraser (son of well-known optometrist, Charles Sankey Fraser) in 1934.

Embroidered signature cloths became popular the late 1800s and were often used as fundraisers for different organisations. Capturing a particular moment or event in time, signature cloths often featured the names of prominent public figures who contributed a sum of money to see their signatures preserved and displayed, with monies raised being donated to a charity or community cause. Signature cloths made during the early 1900s, especially those made during periods of war, have achieved special status as vehicles for remembrance of local, national, and international events.

As objects produced and worn in the context of Federal and State politics, the signature cloth and evening dress draw attention to the unwritten histories of the wives of politicians. who have been largely overlooked in political or social histories of state and nation. Largely overlooked in politics and in political histories, wives appear as vague and shadowy figures behind their husbands’ overt public presences. Though several Labor Party women held significantly political (as opposed to ‘housekeeping’) roles - leading and organising rallies, deputations and demonstrations and addressed outdoor meetings - their names are found in archives, papers and theses but are rarely mentioned in general histories of the labour movement.

Drawing particular attention to the 1909-1915 Labor government led by Prime Minister Andrew Fisher, and to its support by women voters which has since been identified as a major contributor to its election success, the cloth also allows us to examine particular aspects of Fisher's legislative achievements for women. Of special interest in this regard was the introduction of the 1912 Maternity Allowance Act. A response to women’s recently found political power, The Act provided a state payment from general revenue to mothers in their capacity as citizens.

Moreover, the claims of unmarried mothers were equally legitimised, and payments made directly to women, rather than their husbands. Responding to criticisms from the Council of Churches, Fisher stressed the fears and uncertainties faced by women in childbirth, saying ‘Maternity is more dangerous than going to war’ and ‘more dangerous than the battlefield’.

Among Fisher’s most notable achievements as Prime Minister were the establishment of the Commonwealth Bank, the Australian navy, the foundation of a national capital, the takeover and attempted development of the Northern Territory, the building of the transcontinental railway, a land tax to promote more intensive development of the interior, compulsory enrolment to vote, universal military training, the officer school at Duntroon, government munition factories, old age and invalid pensions.

According to his biographers, Fisher's strength as party leader is attributed to his ability to integrate and unify disparate elements of the Labor party, while his record however reveals a legacy of reforms and national development which lasted beyond the deep divisions wrought by Prime Minister Hughes in the Labor party and Australia.