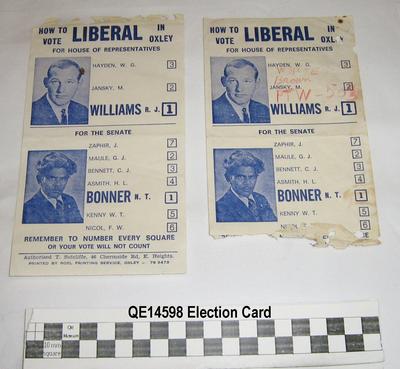 History and use
Neville Bonner (1922-1999) was the first Aboriginal person in Federal Parliament, representing Queensland as a Liberal Party Senator. This election card is from the 1972 Federal election for the seat of Oxley in Brisbane.

Neville Bonner worked as a labourer on rural properties in New South Wales and Queensland until 1946 when he was appointed to the position of settlement overseer on Palm Island in north Queensland which he held for 16 years. In 1960 he moved to Ipswich and began a long association with ‘One People of Australia League’ (OPAL) supporting Aboriginal issues. He campaigned for Aboriginal rights and was a respected Elder for the Jagera people of southeast Queensland.

Following the 1967 Federal Referendum, which removed references in the Australian Constitution discriminating against Aboriginal people, Neville Bonner joined the Liberal Party. In 1971 he became the first Aboriginal member of Commonwealth parliament when he filled a casual Senate vacancy. He was re-elected in 1972, 1974, 1975 and 1980. He crossed the floor 23 times to vote against his own party and in 1982 the Liberal Party demoted him from first to third place on the Queensland Senate ticket. He resigned from the party and stood as an independent but was not re-elected.

Neville Bonner was also a Board member of the Australian Broadcasting Corporation and author of several books including Black Power in Australia; Equal World, Equal Share; and For the Love of Children. In the 1970s he campaigned for Government assistance for Aboriginal people and Torres Strait Islanders to form community councils, health, legal and other welfare services, working towards self-determination. He was involved with the ‘Tent Embassy’ in Canberra which has become a symbol of resistance and an inspiration to younger generations to continue the struggle to resolve political and social issues.