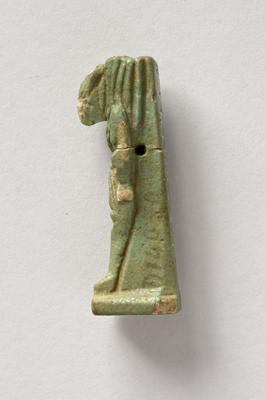 Description
Green coloured faience Egyptian amulet, worn as a charm. Figure stands upright with left leg forward in a striding pose, with the arms and hands straight at the side of the body, with the head of an Ibis. Figure is clothed in linen dress. Horizontal threadhole at shoulder height on back of figure. Horizontal threadhole at chest height, at the back of the figure. Glaze worn at beak, and left side of figure, and right side at base.

History and use
Ancient Egyptian beliefs concerning the afterlife are well known. Death was the entering of a new phase of being. Ancient Egyptians believed in many different deities, often represeted by amulets. Amulets served as magical objects, deriving their power from colours, materials and colours They offered protection both in daily life and the hereafter. Amulets were work as jewellery, concealed in clothing, and were placed in the wrappings of the deceased or placed in tombs. This amulet takes the form of Thoth, the Ibis headed patron of scribes.