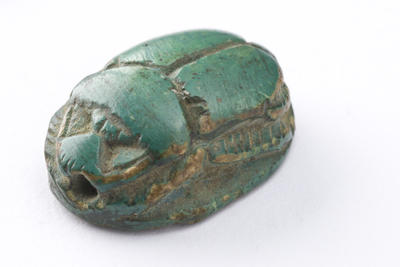 Description
Egyptian green coloured scarab beetle amulet. Heiroglyphic inscription on verso. Green glaze on a ceramic core or buff-orange stone base with green glaze. The cartouche attempts to spell Mn-hpr-ra, Thutmose III. The glyphs are filled with fine brown encrustations. The clypeus is diamond shaped and incised with five vertical lines. It sits below a very small triangular head and a large thorax. The elytra is divided unevely in two, with triangular notches on each side near the thorax, and a larger triangle at the back. The legs are tucked under the body and decorated with lines indicating hairs. The whole scarab is pierced along the length of the body, but the hole is off-center. The edges of the top surface are extensively chipped showing the buff-orange stone beneath and there are oblique striations over the surface of the elytra and thorax.
The back face is inscribed, with wear all around the outside face and one large chip to the bottom, showing the pale stone substrate. On the right and left are marks that bear little resemblance to real glyphs. The carving overall is very rough with numerous chips below the glaze.

History and use
Amulets, or charms, were favoured by the ancient Egyptians.The famous Egyptian scarabs were a common type of protective amulet (charm). This object was collected by a serviceman in World War 1, perhaps hoping it would offer protection from the perils of warfare.

In 1914 many thousands of men left Australia for Egypt, encountering landscapes and material culture completely unfamiliar to them. Men were trained in warfare at Mena Army Camp – against a surreal backdrop of ancient pyramids and the Sphinx. When not training, the men spent their spare time in local towns and at Cairo, surrounded by the hustle and bustle of an exotic eastern city. The men enjoyed sightseeing, climbing the pyramids, exploring temples, and acquired Egyptian ‘curios’ (in the parlance of the era -rare, unusual, intriguing objects) for themselves, at the request of friends and relatives, or as gifts for family – what would become the ‘bric-a-brac’ of war.