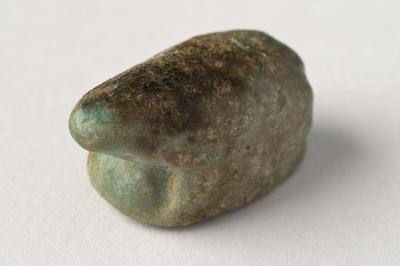 Description
Small blue green Egyptian faience amulet in the form of a squatting frog, representing Heket. Some wear to glaze.

History and use
This is one of four blue-green glazed faience amulets, in the form of a squatting frogs, which were excavated from Deir el- Bahri, near Thebes, Egypt. The deity most commonly associated with the frog was Heket. To the ancient Egyptians, the frog was a symbol of fertility, creation and regeneration. Frog amulets were sometimes included in the wrappings of mummies, or carried as talismans. Frog amulets represent life and fertility, particularly the last stages of the annual flood. The frog-headed goddess Heqet was popular among women and associated with the final stages of child birth. Midwives are typically referred to as “servants of Heket”. As these do not have holes for suspension they were not worn as jewellery.