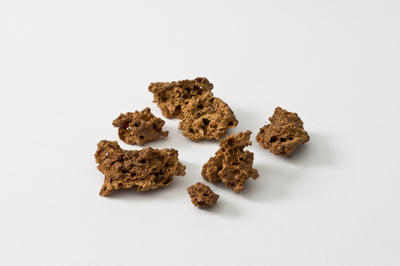 Description
Fragment, thick bread, hardened due to age. A finely textured background matrix containing large honey-brown fragments of plant tissue including fragments of wheat chaff, seed of einkorn wheat (Triticum monococcum) or emmer wheat (Triticum dicoccum). The bread contains large voids, many of which contained small black material similar to insect frass. The remains of several insects were found in the specimen but the flexibility and freshness of the remains suggests they are relatively recent in age.

History and use
Bread was a key staple in the Ancient Egyptian diet, and was consumed by wealthy and poor- from labourers to Pharoahs. Meals were considered incoplete unless bread was also consumed. Bread was made mostly from wheat grains. Bread was flat and circular, similar in shape to a pita bread. They could also be rectangular or triangular in shape. Analysis of these bread fragments identified wheat grains and also contained a seed of the weed species Bromus. The holes in the bread were likley made by insects, who also enjoyed eating this bread!