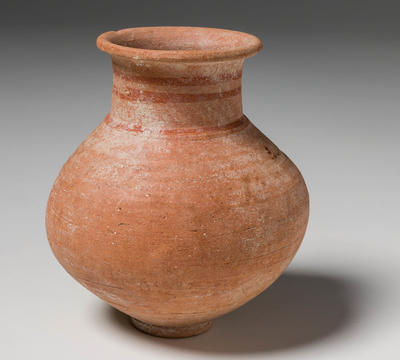 Description
Orange, red ceramic pot with bulbous body, formed foot and turned-out rim. It is decorated with red bands around the neck. Reddish brown paste, reasonably fine texture, with a scattering of small white inclusions. Small pot or vase, with a matt finish, a bulbous body, wide neck and a small foot ring. Has a pronounced outwardly turned lip. It has two parallel darker lines, circling the neck, approximately equidistant and another red band around the shoulder at the junction of the neck. There is a join between neck and shoulder, possibly another join between neck and shoulder, perhaps the body did not run true and the potter added another strip of clay to the body and then added the neck. The whole piece is slightly uneven and asymetrical. There are pronounced parallel, continuous striations around the body, there are areas of encrustation and some areas of wear. There is a chip in the rim and another on the underpart of the body. Possible evidence of fingerprints on the body of the pot and a hair trapped under the slip on the lower inside of the neck. On the inside of the pot, there is wearing on only one quarter, the rest is mostly unencrusted and shows little or no wear. There is a scattering of vesicles.

History and use
Roman red-ware pottery vessels were a common sight on tables throughout the Mediterranean following its mass production from the 3rd C BC. Plain, undecorated vessels such as this were relatively common place throughout the Empire.