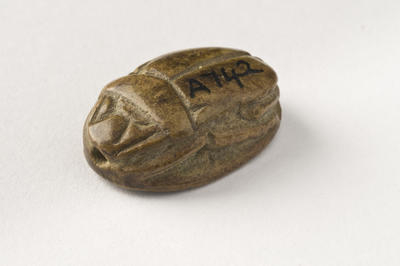 Description
Scarab beetle amulet. Decorated with four cobras in a brown stone. The clypeus is triangular and rather worn, and the head is very small, almost non existant. The thorax is shaped like an elongated pentagon and the elytra is divided in two, with notches on each side near the thorax, and a larger triangle at the back. The legs are tucked under the body. The back face is inscribed four Uraei in a quadripariate layout. The encircling line is very rough and worn, but the Uraei are farly well carved with rough hatching on the inside surface. In one area there are faint traces of green, possibly a glaze. Central threadhole in amulet from top to bottom.

Signature/Marks
<A742>
Base with geometric motif, meaning unknown, possibly Dynasty 15.

History and use
Amulets, or charms, were favoured by the Egyptians. The famous Egyptian scarabs were a common type pf protective amulet (charm).

In the First World War, many servicemen saw duty in foreign lands, collecting ancient items of material culture and sending these back to loved ones back home.

In 1914 many thousands of men left Australia for Egypt, encountering landscapes and material culture completely unfamiliar to them. Men were trained in warfare at Mena Army Camp – against a surreal backdrop of ancient pyramids and the Sphinx. When not training, the men spent their spare time in local towns and at Cairo, surrounded by the hustle and bustle of an exotic eastern city. The men enjoyed sightseeing, climbing the pyramids, exploring temples, and acquired Egyptian ‘curios’ (in the parlance of the era -rare, unusual, intriguing objects) for themselves, at the request of friends and relatives, or as gifts for family – what would become the ‘bric-a-brac’ of war.