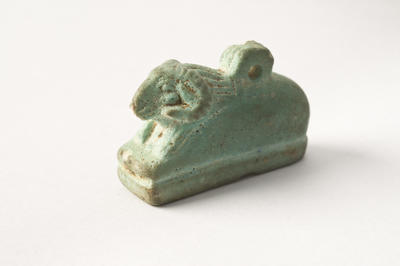 Description
Green glazed Egyptian faience amulet of Khum, the ram headed diety. Threadhole crafted on top of the amulet. Some loss to glaze.

History and use
Ancient Egyptian beliefs concerning the afterlife are well known. Death was the entering of a new phase of being. Ancient Egyptians believed in many different deities, often represeted by amulets. Amulets served as magical objects, deriving their power from colours, materials and colours They offered protection both in daily life and the hereafter. Amulets were work as jewellery, concealed in clothing, and were placed in the wrappings of the deceased or placed in tombs. This amulet probably symblises Khum, the Ram headed god associated with the Nile, potters, power, creation and fertility. This amulet was designed to be worn as a pendant and likley dates to the Late Period (c 664-525 BC).