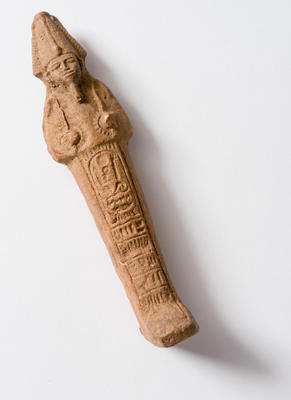 Description
Unglazed terracotta Egyptian mould made figure of pale orange fabric and no slip. Figure is wearing the white crown of upper Egypt, and is flanked by two ostrich feathers, stands with folded arms, holding two picks. The face is wide with thin eyes and mouth. The arms of the figure are poorly formed, but the hands are indicated and hold a crook and flail. Below the arms and along the body is a panel of decoration between two parallel lines. The feet protrude out from the body and are undecorated.

This is a non-genuine figurine representing the form of a mummiform Osiris. It contains a cartouche of Ramses II on the front. Osiris wears a tall 'atef' crown and a false beard. The first register has a small section of vertical lines above and below are large cartouche with an approximation of the cartouche of Ramses II. Below this large register are five smaller registers decorated only with vertical lines and each seperated by a horiztonal line.

This is an example of a modern shabti tourist art piece produced in the 19 and 20C. It is a modern shabti of the Osiridae type, figures in the form of Osiris wearign an atef crown, and bearing a column of heiroglyphs on the legs and sometimes a cartouche imitating Menkheperre or other royal names. The figure holds hte crook and flail, and in some examples the hoe/flail hybrid. See Potter 2022 A note on Modern (Fake) Shabtis as tourist art, Journal of Egyptian Archaeology 1-8.