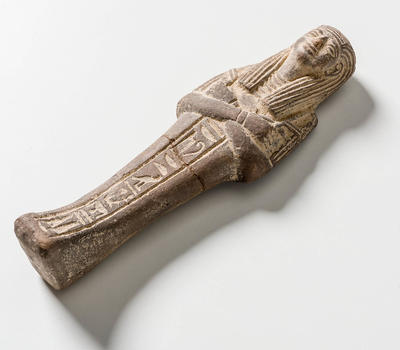 Description
Figure, terracotta shabti with heiroglyphic inscription. The fabric is mostly grey with buff accretions in the crevices. The reverse is flat with some mottling of darker grey and brown. The figure has a tripartite wig, almond shaped eyes, triangular nose and prominent lips. Around the neck is a six-stranded collar. The arms are well formed and crossed over the chest. Each hand holds a flail. Below the arms is a rectangular panel surrounded by a single line, inside which are a series of genuine glyphs forming a nonsense inscription. The feet are indicated only by a slight flaring of the base. Repaired.