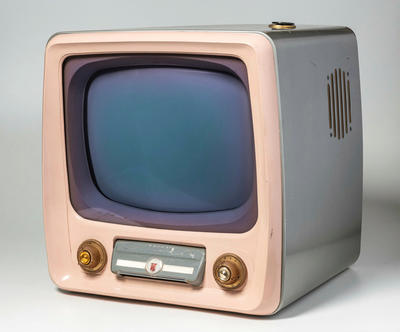 Description
Black and white "Kirby Crosley" television. Made by Technico for Pye in Australia. Shell pink face. A speaker grate is cut into the right side of the television, with speaker mesh behind it. 2 metal dials on front face with model name and crest embossed on a metal plate in the centre of the set. An aerial plate is fixed the top right hand side of the set.

History and use
This visually interesting Pye-Technico Television was purchased in Sydney in 1958. Manufactured by James N. Kirby Holdings Pty Ltd in Sydney, the use of coloured plastics such as this pink casing for this television was the height of fashion in the 1950s.

James N. Kirby Holdings Pty Ltd was establsihed by James Kirby in 1946 and began manufacturing consumer goods including Crosley television sets and Pye transistor radios. James N. Kirby was a well-regarded indsutrialist and worked on a number of precision engineering projects and recognised the potential market for household consumer goods in post-war Australia.