History and use
This litter belonged to the Queensland Ambulance Transport Brigade (QATB) Toowoomba and dates from the first decade of the 20th century. The patient would be pushed by two ambulance bearers to the hospital or doctor. Often ambulance litters would be towed behind dog carts to the scene of an accident.A step-down axle allowed ambulance bearers removing the stretcher with patient to step over the axle, rather than lifting the patient over the wheel. Ambulance litters were used around town streets until around 1915 when motor ambulances became common, but litters were still used at sporting grounds to carry injured athletes, and at hospitals. (Bolton Collection) 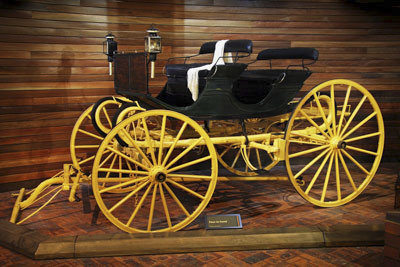