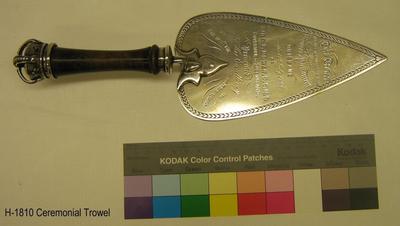 Description
Presentation trowel, silver plate blade and wooden cylindrical handle with silver crown detail to base of handle. The blade bears an engraved inscription and is ornamented around the edge with a border of arrow heads culminating in a leaf at the connection to the handle. Reverse side of blade is smooth and featureless, with no ornamentation or maker's mark.
It was used for ceremony of the laying of foundations for Queensland's Parliament House in 1865

History and use
This trowel was used in laying the foundation stone of Parliament House on 14 July 1865 by the first Governor of Queensland, Sir George Ferguson Bowen CCMG.

In 1859, the colony of Queensland was granted separation from New South Wales, and a constitution was established, based on the English Westminster system. In 1864 a competition was held to design a new House of Parliament in the capital city of Brisbane at a site on the corner of Alice and George Streets. After some controversy, Colonial Architect Charles Tiffin was selected. His design comprised four wings around a central courtyard, with the Legislative chambers in the George Street wing and government offices in the remaining wings. The main wing of Parliament House (facing George Street) was erected between 1865 and 1867. At the time of construction it was the largest and most imposing building in the state.

Due to financial constraints, only the George Street wing was constructed at this time. Additions were made in 1878 including the archways and colonnades on George Street. The Alice Street wing was constructed between 1887 and 1889. Parliament House continues to be used as the seat of Queensland government and is important as the place where virtually every significant political decision has been made for more than 140 years.