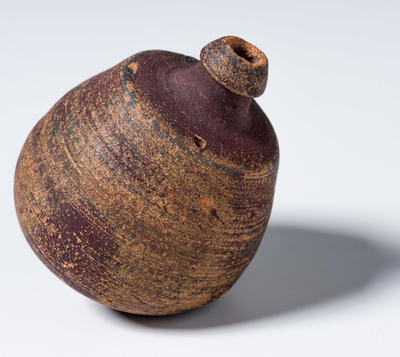 Description
Sphero-conical vessel. Fatamid. Oval shaped body, narrowing to small nozzle at top of the vessel. Highly fired yellow brown clay, dark brown to purple slip, with wear to the outer vessel. Worn glaze. Lacks ornament. The rim is thick and inverted, on top of a thinner neck. The mouth is only a small opening. The main body of the vessel is an ovoid, truncated at the shoulder, which is sharply defined and joins the neck almost horizontally. The body is undecorated and the base is convex with spiral ridges consistent with a vessel thrown quickly on the wheel and not trimmed.

History and use
The function of these enigmatic objects, called sphero-conical vessels, and found from Egypt to central Asia during the later Islamic Period, are the subject of much debate. Some experts think these are ancient incendary devices, such as hand grenades or gunpowder flasks, containers for mercury, fire blowers, others perfume bottles, holy water bottles, lamps or decorative finials in architecture. They are made from a highly fired ceramic that looks like stone, and they are often called stone ware. They are either plain or decorated with incisions and covered with a grey brown slip. These were made in different workshops. Some were made of metal or glass.