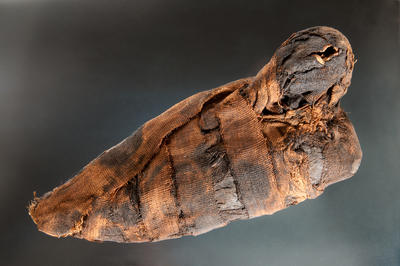 History and use
Mummification and mummy wrapping were skills not just reserved for human bodies. In ancient Egypt, a wide variety of animals were mummified, ranging from mice to bulls. Cats, dogs, snakes, baboons, and especially birds were the most popular mummified animals. Mummified animals were usually bought as offerings to particular gods. Thus, a cat may be offered to Bastet, an Ibis to Thoth, a falcon to Horus.

This Ibis (Threskiornis aethiopicus) mummy may have been donated to the Queensland Museum in 1913 by Leonard Stevenson Loat, in exchange for ethnological specimens. Loat was an Egyptologist who discovered an ibis cemetery at Abydos. The mummified ibis was placed inside a terracotta pot, which itself was placed in a catacomb.