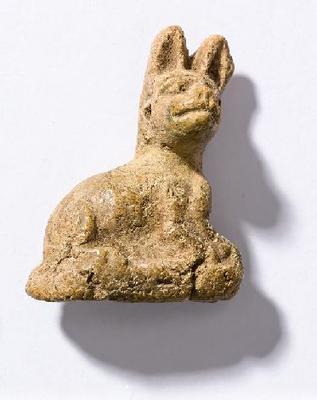 Description
An Egyptian amulet in the form of a cat. Fabric is buff-brown. Cat is seated, with erect ears, and tail wrapped around the body. The eyes and nose are roughly indicated and the mouth is downturned. The head appears too large for the body and the legs are tucked in front. The whole figure rests on a small plinth and is pierced through the neck. This set of 8 amuletic animorphs (cats) may represent jackals (the god Anubis) cats (the goddess Bastet). All have threading hole through neck. Likely strung on a necklace or bracelet. Mould made. Tool marks are present on the reverse of the amulet, probably made during manufacture.