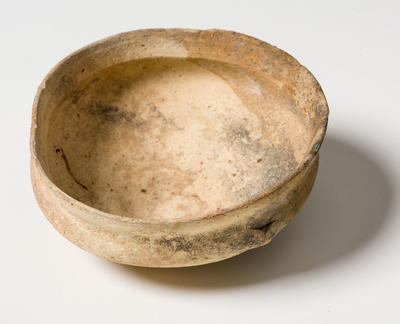 History and use
Pottery is one of the most abundant, common and enduring artefacts in the ancient record, and one of human kinds most fundamental technologies. The craft or making pottery was widespread throughout the ancient world. Pottery was widespread as it was cheap to make, malleable into various forms and watertight after firing. Potters learnt the craft over several years – digging local clay, removing stones and roots, passing it through mesh, mixing with water and settling, cutting into squares, kneading to remove air pockets, forming the vessel, and firing. Vessels can be made using various methods, including pinch, coil, slab, paddle and anvil, and wheel or mould. It can be relatively plain, or decorated by using impressed designs, slips, paints, and even applying mould-made figures. Plain ware vessels are often under-reported in comparison to the more highly decorated vessels. Domestic pottery changed little in form and was largely undecorated – reflecting the ‘form and function’ approach and everyday utility of these vessels.