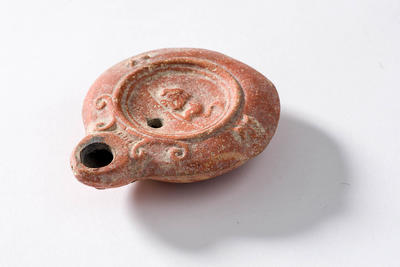 Description
Lamp, mould made. Circular with broad carinated shoulder, wide rim and concave discus. Short rounded nozzle with conjoined volutes on rim to either side of the nozzle base. Flat base surrounded by broad ring defined by two grooves, with a second smaller ring in centre. Double ridge moulding demarcating ring and discus. On discus small lion crouching left with ground line, above off-centre fill hole. On rim, to each side, a 'double-axe' or butterfly motif in relief. At base of nozzle, between volutes, row of short vertical strokes. Buff-brown clay with red-brick slip, unevenly fired to mottled effect. Knife paring on shoulder carination. Signs of burning at wick hole. (Webb, Jennifer M., "Corpus of Cypriote Antiquities", Studies in Mediterranean Archaeology, Vol. XX:p 16)

Media/Materials description
Pottery vessel made of fired clay, complete or fragmented
Inclusions to make the clay less sticky, reduce shrinkage, increase resistance to thermal shock and strength prior to firing.
Gloss (gloss is produced by dipping the vessel into a slip with a high proportion of very fine clay particles. The difference between a slip and a gloss is that a slip is applied to give a different colour, and a gloss is applied to give a sheen to the surface).

History and use
The need to extend daylight hours has always been with us. Before the advent of electricity, allowing a space to be illuminated with the simple flick of a switch, light was achieved by the use of a candle or a lamp. Artificial lighting via candles and lamps was widespread through the ancient world. Lamps were utilised in private and public buildings, in temples and sanctuaries, in street lighting and in ceremonies. Lamps of this distinctive kind were widely manufactured. The crouching lion on the lamps' discus is a common motif, offering guardianship. The lamp is blackened around the nozzle, suggesting that lamp was actually used in the ancient past.