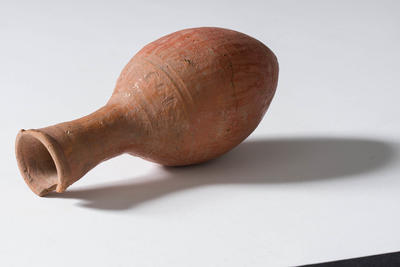 Description
Ovaloid shaped jar made of Nile silt clay with elongated neck, flared flat rim with large chip (missing) and pointed base. There is evidence of shallow indented patterning and banding on the shoulder of the jar. The body of the vessel has 120mm crack running horizontally around the middle of the jar. The vessel has inclusions, indentations and 'wheel ' marks.