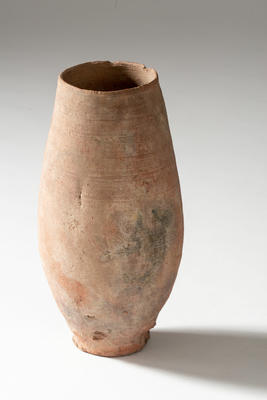 Description
Brown reddish coloured paste earthenware ovaloid shaped jar made of Nile Silt clay with a straight pointed rim which is chipped, and flat crudely made base. The body of the vessel has evidence of 'wheel' marks, with large blackened areas and finger marks indentations at the base of the jar and a small rectangular hole (post-firing), in the middle of the vessel.