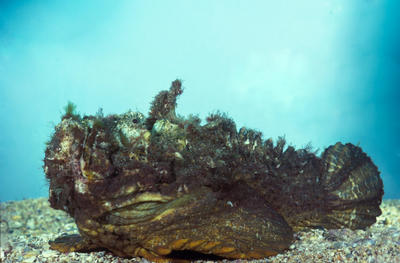 Identification: Total length to 47 cm, common to 28 cm. Head, body and fins are generally dark brown. The skin is warty, scaleless and often covered in a short coat of filamentous algae. Thirteen sharp dorsal spines are each contained in a thick sheath of skin. The head has deep pits and grooves. The eyes are small and situated on a raised bony structure. The pectoral fins are enlarged and fleshy.

Notes: Stonefish are the most venomous of all fishes. They are found throughout shallow coastal waters of the northern half of Australia. The fish usually lies motionless, often partially buried in the substrate and perfectly camouflaged among surrounding coral, rocky reef, rubble, or aquatic plants.

The stonefish has 13 sharp strong dorsal fin spines that are contained within a sheath of thick skin. At the base of each spine there are two venom glands that discharge their contents along ducts in the spine. When disturbed, the fish erects its spines, but maintains its position on the sea floor.

Stings usually occur to the feet of swimmers or waders who have ventured away from clean sandy substrate and closer to the more complex bottom structure preferred by the stonefish. Multiple spines can often penetrate affected limbs, resulting in more extensive envenomation. The pain is immediate, excruciating and may last for many days. Muscular paralysis, breathing difficulties, shock, and sometimes heart failure and death can ensue.

To prevent stonefish stings, sturdy footwear should be worn on reef flats, or while wading on soft-bottom substrates adjacent to rocky or weedy areas. An antivenene for stonefish stings has been developed. In the event of a sting, the victim should leave the water, apply first aid and seek medical attention as soon as possible.

Stonefish are extremely well camouflaged and often almost indistinguishable from their natural surrounds. The venomous dorsal fin spines can cause extremely painful wounds and other serious medical issues.