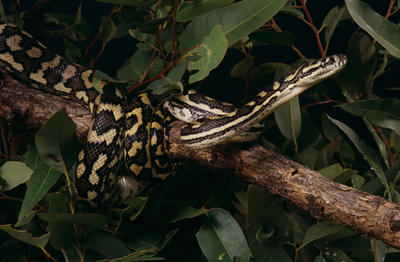 Distribution: This species is widespread and found throughout northern, eastern and southern Australia.

Habits: This snake is active both day and night and can be encountered on the ground, in trees or buildings (particularly chicken pens, barns and attics).

Danger: This species is non-venomous, but tetanus protection is recommended following bites.

Food: Feeds on frogs, lizards, birds, mammals. Cane Toads are sometime taken as prey, with fatal consequences for the snake.

Breeding: 10–47 eggs are laid in early summer. The eggs are concealed in a sheltered site (beneath building materials, between hay bales, a hollow stump or a depression in the ground) and are incubated by the female who will 'shiver' to generate heat. The female leaves the nest to bask in the morning sun and returns to her eggs in a pre-heated condition. Nesting females will defend their eggs. The hatchling snakes measure around 39 cm from the snout to the base of the tail (snout-vent length).

Similar species: This species is most similar to the Spotted Python, Antaresia maculosa, which is fawn to brown with numerous dark purplish-brown blotches. Adult Spotted Pythons are much smaller than Carpet Snakes and have 3 scales across the top of the head in a straight line between the eyes.

Male Carpet Snakes have been observed fighting in spring.