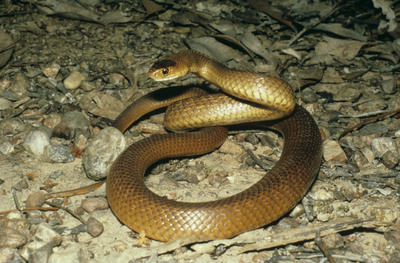 Distribution: Found over most of Queensland, New South Wales and Victoria. It also occurs in southern South Australia and there are isolated populations in the Northern Territory. This species is also present in southern Papua New Guinea.

Habitat: Found in all habitats except rainforest. It has adapted well to farmed, grazed and semi-urban lands. In South-east Queensland, this species is particularly common around Beenleigh and Ipswich.

Habits: This species is active by day, although young Eastern Brown Snakes are often encountered at night.

Danger: This species is dangerously venomous and has been responsible for many human deaths. The venom is strongly neurotoxic. If bitten, apply first aid and seek urgent medical attention.

Eastern Brown Snakes can be pugnacious when provoked and rear up in a distinctive "S" shape.

Breeding: Mating occurs in spring and early summer. Up to 28 eggs are laid. Hatchlings measure around 19 cm from the tip of the snout to the base of the tail (snout-vent length).