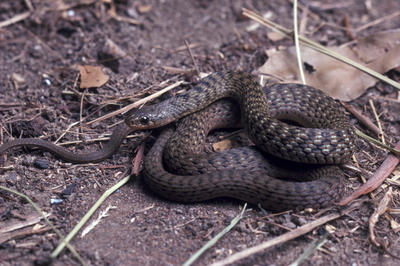 Habitat: Lives in well watered situations along creeks and in swamps but also found in eucalypt forests, heaths, pastures, parks and suburban gardens.

Habits: This species is active both day and night. It is usually found at ground level, but can climb well (a specimen was observed 5 m up a melaleuca tree in a swamp on Cape York Peninsula).

Food: Feeds mainly on frogs but fish, reptile eggs and mammals are also taken. This species is one of the few Australian vertebrates to prey successfully on the introduced Cane Toad. However, attempts by this snake to eat large toads sometimes have fatal consequences for the snake.

Breeding: This species lays 5–12 eggs. The hatchling snakes are around 15 cm from the tip of the snout to the base of the tail (snout-vent length).