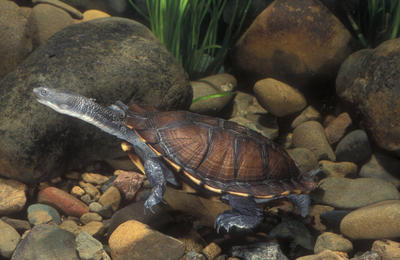 Freshwater turtles are commonly seen in most Queensland waterways. There are about 14 species (and a number of subspecies) recognised from Queensland, all belonging to the family Chelidae.

There are two basic body forms, the short-necked turtles (Elseya spp., Elusor macrurus, Emydura spp., Rheodytes leukops and Wollumbinia spp.) and the long-necked turtles (Chelodina spp.), which have long, snake-like necks. Unlike the sea turtles and many foreign freshwater turtles, the Australian chelid turtles fold their necks side-ways under the protective edge of the shell (pleurodirous). They have clawed, webbed feet and many species have distinct barbels on the chin.

Most freshwater turtles leave the water to lay their eggs. One species, Chelodina (Macrochelodina) rugosa, has developed an unusual nesting strategy. This turtle lays its eggs in a nest dug into the bottom of a shallow pool. The eggs do not develop until the pool has receded and the nest is on dry ground . The eggs can remain submerged for up to 25 weeks and still develop normally when the water is removed. The significance of this behaviour is not fully understood but it may prevent the eggs from being eaten by terrestrial predators. By the time the nest is above the water level, the signs and odour of the nesting turtle will be largely gone.

In some of the short-neck turtles (Rheodytes and Elusor), the cloaca is lined with numerous finger-like projections that act in a similar manner to the gills of a fish. By drawing water into its cloacal cavity, the turtle can satisfy most of its oxygen needs. Turtles armed with this 'bum-breathing' system only surface infrequently for air.

The Common Snake-necked Turtle (Chelodina longicollis) is often seen crossing roads during, or after, rain. This turtle is highly mobile and moves away from permanent water bodies to feed in seasonal lagoons that, for a time, offer a rich abundance of food. These turtles are often killed by traffic and there is evidence that they are declining in heavily settled areas. They were once common in Brisbane waterways but are now rarely seen.