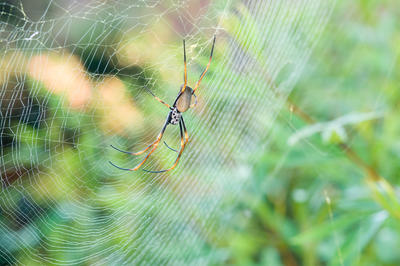 Identification
Female Golden Orb-Weaving Spiders in the genera Trichonephila and Nephila are very large web-building spiders, with three species found in Queensland. The most commonly encountered species along the eastern seaboard, Trichonephila plumipes, has orange and black-banded legs, a black-spotted cephalothorax, and oval grey-brown abdomen. Trichonephila edulis is similar to T. plumipes, but with grey and brown-banded legs with stronger fringes. The Giant Golden Orb-Weaving Spider, Nephila pilipes, is one of the largest spiders in Australia by leg span. It can be surprisingly variable in colour, but is larger than either T. plumipes or T. edulis, with a longer, cylindrical abdomen, darker legs, and less spotted cephalothorax. Males of all three species are tiny in comparison, and can often be found in or near the webs of females.

Web
Females of all three species of Golden Orb-Weaving Spider in Australia build very large, vertical orb-webs, generally supported either side of the hub with a tangle of additional threads. As their name suggests, the webs are characterised by silken threads made of bright golden-yellow silk, of remarkable strength and durability. Indeed, the webs of Golden Orb-Weaving Spiders have been known to capture small birds and bats! Some webs can span enormous distances, and sometimes numerous spiders build their individual webs together, in close proximity, e.g. between powerlines or along walking tracks.

Distribution and habitat
Golden Orb-Weaving Spiders are found throughout mainland Australia, but are especially abundant in the tropical and subtropical north and east. In Queensland, all three species can be found in northern and eastern regions south to the New South Wales border, in wet and dry forests, although N. pilipes is rare in south-eastern Queensland and generally restricted to rainforest or other closed forest habitats. Trichonephila edulis is found widely throughout most of Queensland, including in drier habitats west of the Great Dividing Range. Golden Orb-Weaving Spiders are extremely common residents of gardens and other urban habitats, including around Brisbane, where the large webs of T. plumipes are often a permanent feature of many backyards during the warmer months.

Bite
Golden Orb-Weaving Spiders are timid animals and not aggressive, and will usually run to the edge of their web or drop to the ground if disturbed. Known bites have generally resulted in mild local symptoms (pain, numbness or swelling). As for all bites and stings, if a bite does occur and symptoms persist, seek medical attention.

Remarks
Golden Orb-Weaving Spiders are familiar to most Queenslanders, and among the most commonly-encountered spiders given their abundance, large size and propensity for urban living. Females of both T. plumipes and T. edulis construct their fluffy egg sacs in foliage or other sheltered areas, away from their webs, where those of T. plumipes are often the subject of public interest due to their bright golden-yellow colour. Nephila pilipes, in contrast, buries its egg sacs under leaf litter on the ground. 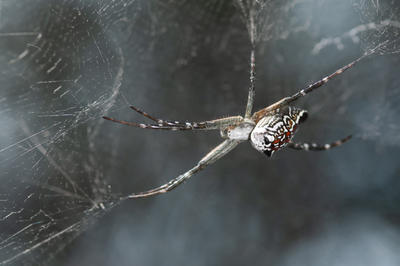 Name: Common Garden Spiders Summary: Spiders are ubiquitous in gardens, houses and urban environments throughout Queensland, and a wide variety of species can easily be found, especially in the eastern tropics and subtropics. The species accounts below highlight some of the more frequently encountered species in Queensland backyards. Subject categories: Spiders See full details